Acupuncture is a safe and effective form of medical treatment. Through the insertion of fine, hair-thin needles into points along energetic pathways, called channels or meridians, the subtle energies of the body can be rebalanced.

The goal of acupuncture is to identify areas of excess stagnation and areas of weakness and redistribute the Qi, or vital energy. Choosing which points to needle involves understanding the functions of each individual point, the pattern of the disharmony, and the best way of addressing that pattern on that given day.

Latin word acus, "needle", and pungere, meaning "prick", is a technique in which the practitioner inserts fine needles into specific points on the patient's body. Usually about a dozen points are needled in one session, although the number of needles used may range anywhere from just one or two to 20 or more. The intended effect is to increase circulation and balance energy (Qi) within the body.

What are the treatment methods used by Traditional Chinese Medicine?

Auriculotherapy, which comes under the heading of Acupuncture and Moxibustion.


Dietary recommendations are usually made according to the patient's individual condition. The "five flavors" (an important aspect of Chinese herbalism as well) indicate the function of various types of food. A balanced diet, which leads to health, is when the five functional flavors are in balance. When one is diseased (and therefore unbalanced), certain foods and herbs are prescribed to restore balance to the body.


In China, herbal medicine is considered as the primary therapeutic modality of internal medicine. Of the approximately 500 Chinese medicinal herbs, 250 or so are commonly used. Rather than being prescribed individually, herbs are formulated to adapt to the specific needs of individual patients. A herbal formula can contain 3 to 25 herbs. As with diet therapy, each herb has one or more of the five flavors/functions and one of five "temperatures" ("Qi") (hot, warm, neutral, cool, cold). After the herbalist determines the energetic temperature and functional state of the patient's body, he or she prescribes a mixture of herbs tailored to balance disharmony. One classic example of Chinese herbal medicine is the use of various mushrooms such as reishi and shiitake, which are currently under intense study by ethnobotanists and medical researchers for immune system enhancement. Unlike Western herbalism, Chinese herbal medicine uses many animal, mineral and mineraloid remedies, and also uses more products from marine sources.

Cupping: A type of Chinese massage, cupping consists of placing several glass "cups" (open spheres) on the body. A match is lit and placed inside the cup and then removed before placing the cup against the skin. As the air in the cup is heated, it expands, and after placing in the skin, cools, creating lower pressure inside the cup that allows the cup to stick to the skin via suction. When combined with massage oil, the cups can be slid around the back, offering "reverse-pressure massage".

Die-da or Tieh Ta is usually practiced by martial artists who know aspects of Chinese medicine that apply to the treatment of trauma and injuries such as bone fractures, sprains, and bruises. Some of these specialists may also use or recommend other disciplines of Chinese medical therapies (or Western medicine in modern times) if serious injury is involved. Such practice of bone-setting is not common in the West.

Gua Sha is a form of mechanical dermabrasion using a hand-held scraper to irritate and inflame various regions of the JingLuo's dermal areas. It is frequently used to treat invasion by seasonal external pathogens.

Moxibustion: "Moxa," often used in conjunction with acupuncture, consists in burning of dried Chinese mugwort (Artemisia vulgaris) on acupoints. "Direct Moxa" involves the pinching of clumps of the herb into cones that are placed on acupoints and lit until warm. Typically the burning cone is removed before burning the skin and is thought, after repeated use, to warm the body and increase circulation. Moxa can also be rolled into a cigar-shaped tube, lit, and held over an acupuncture point, or rolled into a ball and stuck onto the back end of an inserted needle for warming effect.

Qigong and related breathing and meditation exercise.
Tui na massage: a form of massage akin to acupressure (from which shiatsu evolved). Oriental massage is typically administered with the patient fully clothed, without the application of grease or oils. Choreography often involves thumb presses, rubbing, percussion, and stretches.

Some TCM doctors may also utilize esoteric methods that incorporate or reflect personal beliefs or specializations such as Fengshui or Bazi. 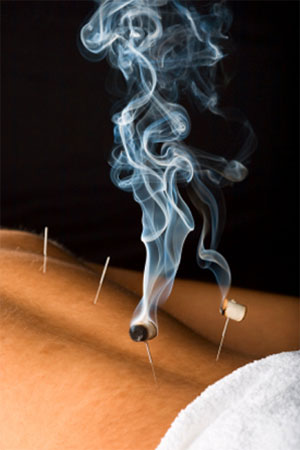